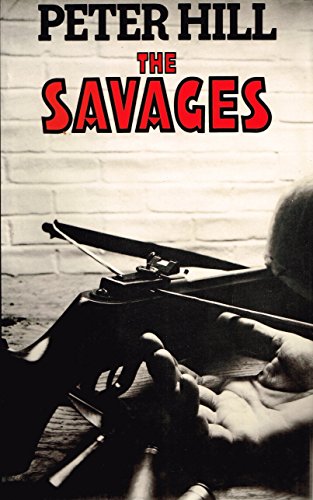 I suspect that Peter Hill is now largely forgotten by modern crime fiction readers.  Back in the 1960s and 70s he was a script writer for many of the iconic British crime shows of the period, including Z Cars, Callan, Special Branch and The Sweeney.  In the 1970s he also turned his hand to writing crime fiction novels and produced six very good books.  Four were police murder mysteries featuring Chief Inspector Bob Staunton and Detective Inspector Leo Wyndsor of New Scotland Yard, and two were darker thrillers set in the murky area between police work and intelligence operations and centred on Commander Allan Dice.  He also produced a novelisation of one of his scripts for Special Branch, In At The Kill, under the pseudonym of John Eyers.

The four Staunton and Wyndsor books, The Hunters, The Liars, The Enthusiast and The Savages, were good police mysteries set in different, usually rural, locations.  Although they were part of a series they can be read separately and in any order.

The Savages is the final book in the series and is a very enjoyable read.  Staunton and Wyndsor are sent to Wallingford when Colonel Bannister-Coates’ clothes are found dressing a scarecrow in a roadside field.  The Colonel, an experienced Intelligence Officer, has not returned to his Oxfordshire village home after a meeting in London and the detectives are to determine if he has defected or whether he is the victim of foul play.  They suspect that the Colonel’s disappearance owes more to local factors than the KGB and soon find themselves sifting through a range of suspects and motives in the village that he lived.

Much shorter than most modern mysteries, this is a briskly flowing tale that smoothly works it way through several twists and turns to a tense and bloody conclusion.  Set before the time of CCTV and modern forensic wizardry, Staunton and Wyndsor have to rely on good old-fashioned techniques and questioning, which gives Hill the chance to introduce a range of interesting local characters.  The plot is well constructed and although it is not too difficult to guess the murderer, there are several good red herrings to keep it interesting.

Hill makes effective use of several contemporary issues of the day, including animal rights, fox hunting and the treatment of gypsies and homosexuals, to give some depth to his story and the interplay between the police and the intelligence agencies is also well handled.  Read now, some forty years after its release, Hill’s sympathetic handling of these issues gives a strong historical sense to the story.  He also interweaves into the plot, clever flashbacks to killer’s childhood which give good insight into why he is like he is, but without revealing his identity until the end.

The characterisations are adequate, although some of the minor characters verge on caricature.  Hill also has good fun contrasting the old-fashioned, East London Staunton with the university educated and more urbane Wyndsor.  The repartee between the two is amusing and gives good insights into their personalities and backgrounds.  They are not as complex as the troubled Commander Dice in Hill’s other books, but they are still a very engaging pair of detectives.

The book has withstood the passing of time well.  The romance elements are a little clunky and dated and some of the attitudes expressed by Staunton may cause slight offence today, although he is more broad-minded than he lets on, but overall it reads well.    I am sure that fans of British detective fiction will thoroughly enjoy this one.

Four stars out of five.