Categories Menu
Home » British Historical Crime » METROPOLIS BY PHILIP KERR (HACHETTE, $A32.99). Due out in April 2019 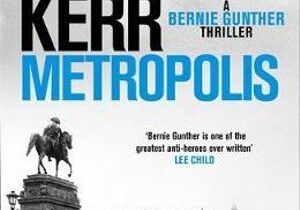 Each week in Forecast Friday I will be highlighting forthcoming books that I am looking forward to reading and reviewing in the coming months.  As with most years, there is a stack of very promising looking books due for release during the year.  Some of the highlights include books by the usual suspects, Michael Connelly, C J Box, Harlan Coben and Michael Robotham and a promising looking new novel from C J Tudor, The Taking of Annie Thorne. Another one to look out for is Hunter (Just One Bite in the US), the sequel to Canberra writer Jack Heath’s shocking first novel Hangman.  There are also some great looking debuts, including The Silent Patient by Alex Michaelides, Past Life by Dominic Nolan and a new Scottish police series, From The Shadows by G R Halliday.

The book that I am most looking forward to reading, however, is Metropolis by the late Philip Kerr.  Due out in April this is the fourteenth and last novel in Kerr’s popular and highly acclaimed series about Berlin detective Bernie Gunther.  Reportedly set back in 1928 in the dying days of the Weimar Republic before Hitler and the Nazis come to power, it details Bernie’s investigation into a string of murders of local prostitutes.  Bernie is a young detective working in Vice when he gets a summons from Bernard Weiss, Chief of Berlin’s Criminal Police. He invites Bernie to join KIA – Criminal Inspection A – the supervisory body for all homicide investigation in Berlin. Bernie’s first task is to investigate the Silesian Station killings – four prostitutes murdered in as many weeks. All of them have been hit over the head with a hammer and then scalped with a sharp knife.

Bernie hardly has time to acquaint himself with the case files before another prostitute is murdered. Until now, no one has shown much interest in these victims – there are plenty in Berlin who’d like the streets washed clean of such degenerates. But this time the girl’s father runs Berlin’s foremost criminal ring, and he’s prepared to go to extreme lengths to find his daughter’s killer.

Philip Kerr died unexpectedly of cancer in early 2018.  He apparently completed Metropolis shortly before his death. The book goes back to Bernie’s origins as a homicide detective and is intended to give readers a glimpse into the cases that formed his later perspectives on crime.  It is sad that this is the last Bernie Gunther novel, but it will be good to make the detective’s acquaintance one more time.