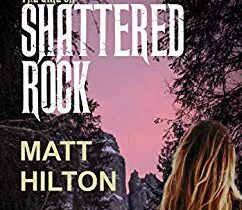 I must admit that I was not a huge fan of Matt Hilton’s early Joe Hunter novels.  However, the plot of The Girl On Shattered Rock sounded interesting and I thought I would give it a try.  I was not disappointed, as it is a terrific little thriller.

Author Leah Dean flees to the remote island of Shattered Rock, off the coast of western Scotland, to escape from her abusive boyfriend and to find the peace she needs to finish writing her second novel.  With the deadline for the book rapidly approaching she is hoping that the seclusion of the island will force her to concentrate on her writing.  Her peace, however, is disrupted by some strange occurrences and she suspects that she is not alone on the island.  When a group of kayakers put to shore, Leah thinks that they are her stalkers, but she quickly comes to realise that they are the least of her problems.

This is a gripping thriller that readily draws the reader in.  Hilton quickly and expertly establishes Leah’s background and smoothly sets the scene for the action that is to follow.  Once the kayakers arrive the pace speeds up and Hilton keeps the reader off guard with some thudding shocks, as the group tries to fend off the unknown attacker.

The supporting characters are swiftly and effectively crafted, and are well fleshed-out as individuals.  Leah develops nicely as a main character as the book progresses, and is more credible than a lot of the central characters you encounter in some of the popular domestic thrillers on the market.  The reactions of the group to the danger around them is convincingly handled and Hilton moves the story along in some interesting and surprising directions.

I thoroughly enjoyed it and easily read it in a couple of sessions.  I thought that the killer’s motivation lacked some credibility, but I was too busy turning the pages to care. The rapid pace and the high death toll reminded me of Simon Kernick, and fans of his books will like this one too.

The Girl On Shattered Rock was released in late January and appears to be only available on Kindle.  It is very reasonably priced at $A4.19 or £1.99

Highly recommended.  Four and half stars out of five!