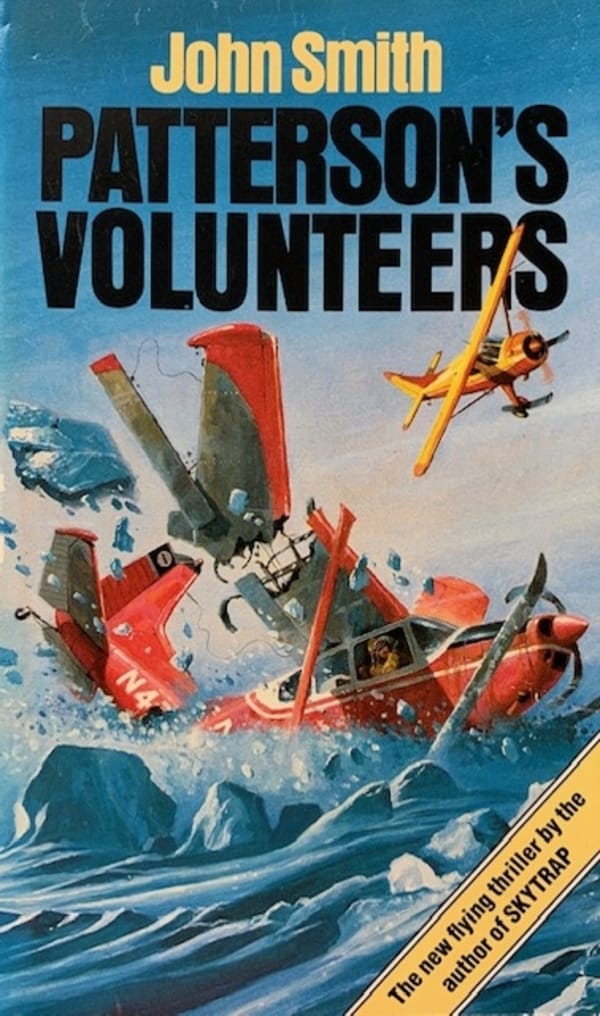 Patterson’s Volunteers by the little-known John Smith is a solid adventure yarn with a good deal of technical flying detail and a solid plot about a missing World War II squadron and a pile of gold.

John Smith only wrote two novels before reverting to the name of John Templeton Smith and venturing into action, spy novels.  Born in England, Smith had the good fortune to live close to one of the masters of British thriller writing, Desmond Bagley.  Bagley apparently mentored Smith, who was a pilot and aerospace journalist, and helped him to write his first novel under the Smith name, Sktytrap (1983).  This was followed in quick succession by Patterson’s Volunteers (1984), before Smith headed to America and wrote a further 8 novels under the name of John Templeton Smith.

Patterson’s Volunteers is very much in the vein of novels by Gavin Lyall and Jack Higgins, with perhaps a nod towards Desmond Bagley himself.  The story revolves around a squadron of sixteen P-51 Mustangs which went missing over the remote eastern section of Greenland at the tail end of the Second World War.  When Luke Spence, a local Arctic ferry pilot and Vietnam War vet with a cloud hanging over him from an incident in the war, is approached to fly a small group to the suspected location of the planes he refuses.   But entrepreneur Rollo Scarth is persistent and when Spence refuses the money that he is offering, Scarth blackmails the pilot into taking the job.

Reluctantly Spence finds himself flying an ageing de Havilland Beaver into an isolated section of Greenland in search of the planes and the cargo they were carrying.  It is a dangerous task made more so by the horrendous weather conditions and the untrustworthy nature of his passengers.

It is quite an enjoyable adventure yarn.  There is plenty of hazardous flying detail and Smith is good at making the reader feel the stress and tension of flying through a storm or landing on impossibly short ice landing strips.  The technical detail is convincing, but there is probably too much of it, and Smith is good at conveying the beauty and harshness of the Arctic. The plotting is adequate, although Smith takes too long in setting his story up and there are too many extraneous strands.  The ending is drawn out and probably lacks the excitement and surprises that a writer like Gavin Lyall would have brought to it.  Nevertheless, it moves along at a reasonable pace and Spence is a solid action hero with a fair share of flaws and guilt from an incident during his tour in Vietnam.

Patterson’s Volunteers sits firmly in that vein of British adventure writing that developed and grew during the 1960s and 70s.  The basic story could have easily been something concocted by Gavin Lyall or Hammond Innes, and it is actually a little reminiscent of Jack Higgins’ East of Desolation. The back cover of the book makes comparative references to Innes, Lyall and Dick Francis and the front cover has the look of the Fontana covers done for Geoffrey Jenkins’ books in the 1970s, although not as polished.  At a quick glance it certainly looks like being in the same mold as Lyall and Jenkins. These writers, however, would have brought a bit more flair to it, if they had written it.

In all, I enjoyed it and will go back also re-read the first Smith book, Skytrap.