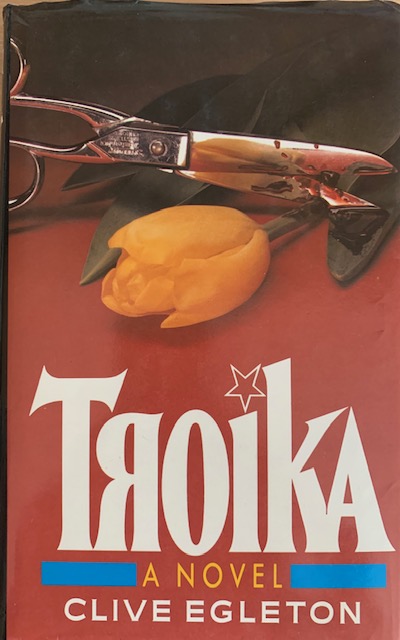 Clive Egleton is often overlooked as a thriller author, but during his long career (1970 to 2005) he was one of Britain’s most reliable practitioners of action espionage thrillers.  His best book was undoubtedly Seven Days To A Killing, filmed as The Black Windmill with Michael Caine, which had a good, twisty plot and a terrific ‘shoot-it-up’ finale.

Egleton’s books usually featured world-weary British spies with a military background, but in 1984 he tried something different with Troika (1984), which had a Russian GRU officer as its central character.  Perhaps in response to the success of Gorky Park, Egleton set large portions of his book in the Soviet Union and most of the plot is seen through the eyes of the Soviets.  The story is set in the last days of a sick Brezhnev’s reign and revolves around Politburo infighting as the KGB launch an audacious scheme to discredit rivals in the imminent succession battles.  Caught in the middle of it is military intelligence officer Georgi Kirov, who is despatched to London and then New York, ostensibly to persuade the defector daughter-in-law of Romanov, a Leningrad party boss and possible Brezhnev successor, to return to the fold. Kirov, however, stumbles on the real reason for his mission and finds himself being chased by both sides.

It is a very intricate and at times confusing plot, which is made more difficult to follow by the host of similar sounding Russian names.  Close reading is required, however, the effort is worthwhile as Egleton pulls the various strands of the complex scheme come together.  The story moves at a solid pace and there are flashes of violence and some gritty torture and killings scenes. Kirov is an engaging and interesting hero and once the story reaches New York the tension ramps up considerably.

When I reviewed Troika back in 1984 for the Canberra Times, I said that it was a gripping and intelligent thriller, but that the final climax did not deliver on the goods promised in the build-up.  I think that this assessment still holds true. Egleton was noted for his well-choreographed action scenes and shoot-outs, but this is largely missing from Troika and the ending falls largely flat.  There is a suggestion on the final page of a possible sequel, but this never happened and many of the plot elements are left hanging.

Overall, I thought it was a solid spy thriller, which, reading now, offers some interesting, cynical insights into Russian politics and the inter-service rivalry which is still prevalent today.  Readers who are new to Egleton, would be better served, however, by trying one of his better novels, such as The Mills Bomb, Backfire or Seven Days To A Killing.

Four stars out of five.