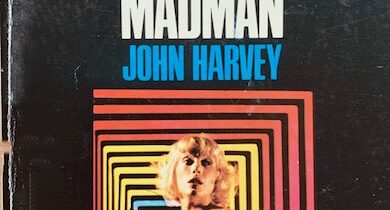 Before finding commercial and critical success with his Charlie Resnick novels, John Harvey churned out dozens of westerns and pulpy crime novels for various popular publishers under a variety of names.

Neon Madman was the fourth book in his series about Scott Mitchell, Britain’s “toughest private eye, and the best.” Written between 1976 and 1977, the four books; Amphetamines and Pearls, The Geranium Kiss, Junkyard Angel and Neon Madman; were fast paced tales that featured plenty of fighting and wise-cracking by the very resilient Scott Mitchell.  Described by Harvey as being “American pulp in a clearly English setting”, the books offered all the requisites of tough PI fiction: luscious babes, dead bodies, snappy dialogue and surprising endings.  They were good fun at the time and still are enjoyable reads.

The Neon Madman opens with Mitchell returning from a routine divorce case where he managed to snap the straying housewife in bed with her lover, only to be attacked in his office by “the most dangerous looking West Indian I had seen for a long time” with fists that “looked like over-ripe bananas.”  Mitchell cannot understand why his routine adultery case has turned dangerous and who the mysterious Mr Murdoch is.  Determined to find out, he comes up against some very dangerous people and an attractive woman or two.

Very different from Harvey’s later books, it is still very entertaining and quite well-written, apart from the typos that can be found in this copy.  There are some good lines and, as with Resnick,  Mitchell has a disdain for modern music on the radio, “apart from Gladys Knight and yet another reissue of ‘Leader of the Pack’ not much of it was worth the fuss.”

The cover is fairly typical of the photo covers of the time with a scantily dressed young lady in only stockings and garters holding a gun and barely managing to hide her breasts behind well positioned hands.  The multicoloured lined pattern behind her gives the book a slightly psychedelic feel and probably links back to the book’s title. The black background overwhelms the cover slightly and takes away fromt the effect of the photo. Nevertheless, it is not a bad cover and it would have certainly attracted attention back in 1977.

In all I enjoyed it.  It is a good straight forward read and reflective of a different time.  As with most of Harvey’s earlier books it is worth checking out (the four books are available as ebooks) and those who enjoy spy fiction should also track down his Endgame written under the pseudonym of James Mann, it is very good early 1980s British spy novel.