TRASHY TUESDAY: STEPS IN THE DARK by Mansell Black (Digit, 1957) 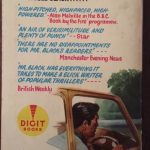 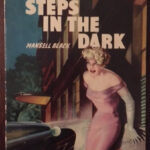 Digit was one of the many so called ‘mushroom publishers’ which sprang up after World War II in England.  Created in 1956 under the Brown Watson publishing house, it produced hundreds of paperback titles, many with great covers like this one!

Steps In The Dark is the fourth book that British writer Elleston Trevor wrote under the pseudonym of Mansell Black about American pilot and adventurer Rick Vaness.  Trevor (better known as the author of the Quiller books under the pseudonym of Adam Hall) wrote four books about Vaness who seems to be a raffish sort of adventurer who helps people in trouble and is not afraid to go up against criminal organisations.  As a Scotland Yard detective notes:

“Vaness, I’ve heard of your earlier exploits – who hasn’t? – and know that you’ve made a quite a big name for yourself by solving several sensational criminal cases.”

There is a “Saint’ feel to the books, although they lack the humour that Leslie Charteris brought to his novels.  One of the books, Dead On Course, was even made into a movie under the title, Wings Of Danger, and the books seems to be reasonably popular at the time.

Steps In The Dark is the final book in the series and finds Vaness investigating the hit and run murder in Salmouth of Mark Stenner, a blackmailer. The accused driver, Roger Scarsdale, is a friend of Vaness (he rescued Vaness when his plane was shot down during World War II) and the adventurer does not hesitate to step in and help clear his friend’s name. Much of his focus is on a roadhouse pub known as ‘The Screaming Monkey’ which seems to house a gang of clever and dangerous crooks.

This is not a great thriller.  The writing is very dated and the dialogue is heavy handed.  The story moves along at a reasonable pace, although there is a lot of talking and explanation.  The conclusion is reasonably exciting, although it lacks the punch of Black/Trevor’s Quiller books.

The wraparound cover, however, is fantastic. The artist would seem to be James McConnell who did some covers for Digit and also historical and western covers for other publishers.  It is a bright, bold cover that screams danger.  Typical of the Digit crime covers, there is a woman in danger in the centre and elements of the story are scattered around, including a reference to The Screaming Monkey.  Surprisingly, there is no reference to it being a Rick Vaness novel.  It has nice clean colours and is certainly eye-catching.

Thanks to Ray Steptoe and Justin Marriott’s fantastic article on Digit covers in The Paperback Fanatic 37, which inspired me to look for the Digit covers I had.