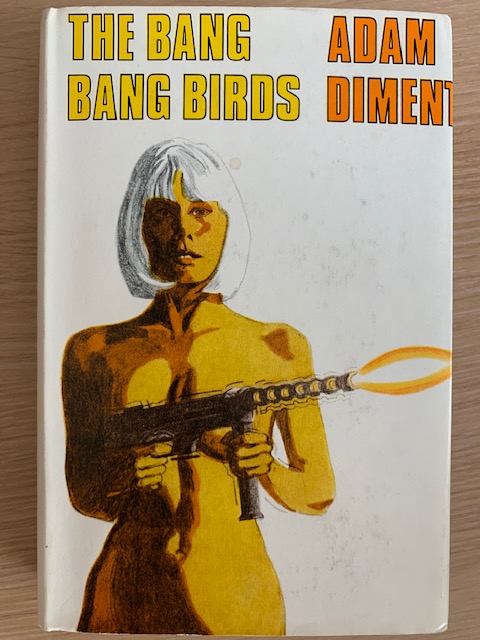 The Bang Bang Birds was the third in the series of spy novels written by Adam Diment about the hip, British ‘pro-hash, anti-spy’ Philip McAlpine. Written in reaction to the more establishment-oriented spies of the time, Diment tried to create a secret agent that spoke to the younger generation of the late 1960s.  The first book in the series, The Dolly Dolly Spy, was a great success and Diment went on to write another three books in quick succession before disappearing from the public eye.  His mysterious disappearance adding to his mystique and the popularity of the books.

I was reminded about this series, which I hadn’t read in decades, by Mike Ripley’s excellent Kiss Kiss, Bang Bang about the boom of British thriller writing in the 1950s, 60s and 70s. I had lost my copies of the books a long time ago, unfortunately, and was pleased to recently come across this Thriller Book Club edition from 1968.

The cover of the Thriller Book Club edition is not as eye-catching as the original hardback and Pan paperback editions, which featured different psychedelic drawings of naked girls with stockings holding submachine guns, but it is still quite good.  It has an ‘art class’, unfinished feel to it, which works well, and the machine gun is strategically placed so as not to offend too much.

The story itself is dated, but enjoyable, and revolves around McAlpine, on loan to the Americans, being forced into impersonating a rich, spoiled jet-setter so as infiltrate the Aviary organisation, a sort of high-end Playboy Club, which runs a nice side line in extracting secret information from its important guests.  McAlpine travels to Stockholm, where the head of the club is based, to secure the micro-film with the blackmail material on it.  After slow start there is quite a bit of adventure and mild sex and some amusing scenes, including an orgy fuelled by acid-spiked drinks.  The ending has a bitter, cynical tone to it, which was typical of a lot of spy fiction of the time.

Diment actually writes quite well and there are several great descriptions, particularly of his girlfriend, Marianne.  Including this one of her frantically looking for some tights to wear with her apple green mini skirt: “She was like a frenzied chipmunk who has just woken up to fact that it’s Spring and it has forgotten where it hid the nuts.” There is also a marvellous scene where Diment makes fun of James Bond’s Q, by having McAlpine refusing a range of bizarre secret gadgets: “I rejected the shoes with built-in hiding place, pop-out piano wire (three feet) and poison gas spray (rub lower heel stitching).”  Of course, a lot of McAlpine’s views and comments are very non-politically correct in today’s world, so be warned.

In all, a fun read and a great cover!