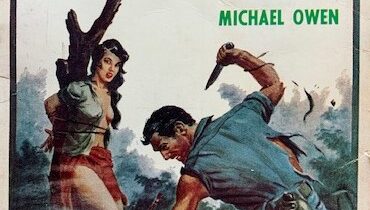 “A moment of violence could save the women from shocking cruelty and humiliation.  Together, the two Australians moved in on the Japanese and the two women pegged to the ground.”

From the back cover of The Coastwatcher

World War II featured prominently in popular fiction well into the 1960s and 70s.  In Australia there emerged in the 1960s a sub-genre of popular fiction about Australian Prisoners of War and how they survived under the Japanese.  These books usually focussed on the cruelty of the Japanese guards and fed off the strong resentment towards the Japanese that still existed in the 1960s (and probably longer).  These books did not dwell on battles, but rather on how the soldiers, and usually attractive young women, withstood the brutality of the guards.  Similar books about beautiful women being tortured by the Nazis also proved popular.

Horwitz Publishing produced several series along these lines, including the Jim Kent, Ray Slattery and John Slater series of books, with titles like Camp Terror, Slave Women and Women Under the Samurai.

The covers of the books usually featured near naked women, being tied up or beaten, or Australian soldiers about to be beheaded.  Some of the covers, such as the one for Gestapo Camp by John Slater, had a real dramatic pulp feel to them.

Thirteen war books were produced under the Michael Owen name, which were mainly written by C. J. McKenzie.  The Coastwatchers is Number 11 in the series and follows a rescue mission to save two women being held by the Japanese on a Philippines island and then a dramatic chase through the jungle.

It is not a bad book.  The pacing is brisk and there is plenty of action and sexual tension between the women and the Australian soldiers.  The writing, however, is perfunctory and the dialogue has a stilted feel to it.  The romance elements are not sophisticated, and the Australian men seemed affronted when the women turn out to be good fighters. There is lots of bravery and some self-sacrifice towards the end. The Japanese are portrayed as savages and there is no attempt to even out their characters.  The two white women, and a Filipino girl, are frequently tied up or tied down and their clothes ripped off them.  Descriptions of breasts and nipples feature prominently, but despite the suggestion of horrible deeds the books are very tame by today’s standards.  In all, it is an easy, diverting read.

The cover is by Col Cameron, who did over a hundred covers for Australian paperbacks, mainly for Horwitz.  It is a good action cover, with a near naked woman in the background and gives a clear sense of what the book is about.  The cover is more dramatic than a lot from this period and is not dissimilar from the covers to be found on American men’s magazines at the time.  Interestingly the Japanese soldier on the ground is holding a shin-gunto sword, which frequently featured on paperback covers.

It is not a great book, but it is certainly an interesting reminder of a popular cultural trend in the 1960s and early 70s.

Like always, this article owes much to the excellent Australian Paperback Guide by the late Graeme Flanagan.