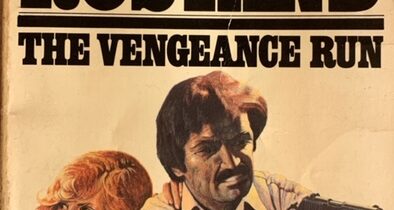 Robert Rostand, pseudonym of Robert S Hopkins, is probably best known as the author of The Killer Elite, which was turned into an average 1970s film by Sam Peckinpah. The book, and the film, featured Mike Locken a former agent of the secret American Department of Security/Office of Protective Services (SYOPS).  Rostand went on to write another two Locken novels, The Viper Game and A Killing in Rome and a handful of non-Locken novels.

The Vengeance Run (1972) is Rostand’s second novel and is a tough revenge/heist novel set in Brazil during Carnaval.  Jack Cochrane used to run a small-time aviation company in Colombia until he was forced into transporting two dodgy passengers across the border to the island of San Andres.  The job resulted in him being shot, his business partner and his wife killed, and his one plane destroyed.  Now after years of searching he has tracked the man responsible, an ex-Nazi officer known as Karl Meyer, to Rio.  Cochrane is intent on killing Meyer, but first he has to help a motley group of thieves steal two million dollars’ worth of diamonds from Meyer’s secure mansion on the outskirts of Rio during the peak of Carnaval.  Also adding to Cochrane’s problems is a crooked Rio cop who is after him and a shady CIA agent who wants him to fly some arms to rebels in the jungle.

This is a good tough thriller that moves along at a brisk pace and offers a solid dose of action and suspense.  The plotting is pretty standard, with betrayals, beatings, double-crosses and a sexy young woman who may not be what she seems, but Rostand manages it well and pulls the strands together into a gritty and bloody climax.  Cochrane is a good, single-minded action character, who is no super-hero, but knows his way around a gun and is very determined.  The secondary characters are a little cliched, but well-fleshed out and interesting.

The engaging story is also aided by some good vivid descriptions of the backstreets of Rio and the darker side of Carnaval.  Rostand apparently lived and worked in South America at different times and his clear-eyed familiarity with Rio is obvious in his writing.  At times The Vengeance Run brings to mind Gavin Lyall, with its convincing flying detail and world-worn character, but Rostand lacks the depth of Lyall’s writing and plotting ability.  Nevertheless, it is a very enjoyable read with a good, satisfying ending.

The cover for the Arrow edition of The Vengeance Run is not particularly striking, but it does have a good dramatic feel to it and gives a sense of the book’s tough nature.  The cover illustration is not directly representative of a scene in the book and in any event, the hair colour is wrong for the book’s central female character, Erica.  There is also the sense that the palm trees in the background were tacked on to locate the generic cover drawing in somewhere tropical.  In my experience, the Arrow covers from this period were not exceptional and this one is serviceable, but is unlikely to draw casual thriller readers to it.  I do not know who the illustrator was.

In all, I enjoyed re-reading The Vengeance Run and thought that it had held up well.  It has inspired me to re-read the other Rostand books in my collection.