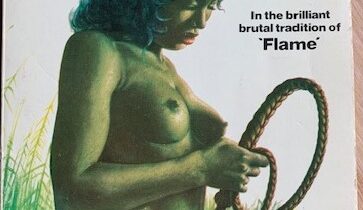 James Doig’s excellent recent article in The Paperback Fanatic (No. 41) on the 1970s Plantation Pulps of New English Library, inspired me to dig out this example from my collection.

Plantation pulp was a weird, popular sub-genre championed by many publishers in the 1970s.  New English Library (NEL) was a particularly enthusiastic promoter of plantation novels and between 1968 and 1981 published about 50 slaver novels. As James notes in his article, much of the appeal of the books came from the forbidden titillation of inter-racial sex and gave white writers and readers the opportunity to indulge in racial stereotypes and tropes, as well as a touch of sadism.  Elements which are clearly present on most of the illustrations for the NEL covers and in the covering taglines for the books: “She was a slave who ruled her masters with the excitement of her flesh” (Flame by Kenneth Roberts).

Norman Gant (pseudonym of George Wolk, 1941 – 1980) wrote three books in his series about the African slave Chane and his offspring for Lancer Press in the late 1960s: Chane, Vengeance of Chane (originally Black Vengeance) and Slave Empire.   The first two books were picked up by NEL and published as part of their plantation canon.  The books were probably more authentic and better plotted than much of the genre, but they still got the ‘NEL treatment’ and are difficult to read today.

Vengeance of Chane details the efforts of Chane’s sons to wreak vengeance for the death of their father “a paid stud of perverse white masters” at the end of Chane, and establish a new life for themselves.  It is a brutal book at times and contains a bit of sexual sadism, mainly involving the imprisonment and physical and sexual torture of the slaves by the owner of the plantation’s wife.  There is also a voodoo element to the story, as the sons of Chane are initiated into the religion as part of their rebellion against the Europeans.  Much is also made of the fact that one of the sons wears a voodoo medallion of writhing snakes around his neck. The ending has a western feel to it, but I struggled to enjoy most of the book.

This 1975 edition has the typically salacious cover associated with other NEL books of this ilk.  It has almost the almost obligatory semi-naked slave and the threat of pending violence with two white men approaching her with a whip.  The fact that she is also holding a whip plays to the ‘slave vengeance’ theme of the title.  I cannot say that the cover relates directly to a scene in the book, but whips and naked slaves do feature prominently in it! The cover is striking, but not particularly well done.  The two men are poorly drawn, and their whip is out of proportion.  The cover is signed, but I cannot work out who the artist is. Nevertheless, it captures well the feel and look of the NEL Plantation Pulps and would be a good inclusion to a collection.