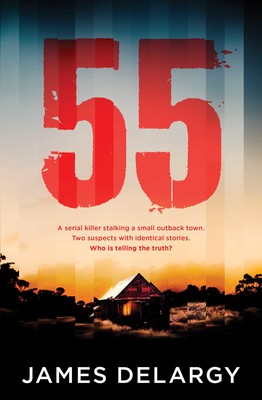 James Delargy’s debut ‘outback noir’ crime novel revolves around an interesting premise.  An injured man, calling himself Heath stumbles into the small, remote Western Australian town of Wilbrook. He is covered in dried blood and bruises and carries no identification. He claims that he was drugged, driven to a cabin in the mountains and tied up in chains by a man called Gabriel. He managed to escape and left his kidnapper lying in the desert after a struggle and a fall down a ravine. He also claims that before he escaped Gabriel told him that he was going to be victim number 55.  Police Sergeant Chandler Jenkins, who runs the town’s small police station settles the man down and starts the search for the kidnapper.  He quickly finds Gabriel, but when he does Gabriel claims that he is the actual victim and that Heath is the serial killer.

The arrival of a senior police officer and his team only complicates things for Chandler, for Inspector Mitchell Andrews used to be a friend of his until they had a falling out years ago.  Things quickly spiral out of control, as further events happen, and the police try to work out which one of their suspects is a serial killer and where the victims are buried.

55 is a very clever crime thriller.  Delargy does a very good job of maintaining the guessing game as to who the killer is and there is a high level of suspense as the plot twists its way to an unexpected and thudding conclusion.  The introduction of a second storyline about Chandler’s and Andrews’ involvement in the search for a missing young man back in 2002 initially slows the pace, but Delargy ably pulls the two strands together towards the end and skilfully uses the flashbacks to enhance the characterisations of the two policemen.  The ending comes as a bit of a shock and is likely to divide readers as to whether it works or not.

Also adding to the pleasure is Delargy’s simple descriptions of the hot, rugged landscape and the people who inhabit it.  He does well in capturing the small details of trudging through the desert, of the “dry, crusted dirt disintegrating beneath the tread of his boots … (and) the unremitting sun.” It is a tough land where “nothing was respected more than the ability to survive, the rule of law an unwelcomed obstacle this deep in the outback.” Delargy gives a good sense of the Western Australian outback and its people, although he does little for the local tourist industry.

In all, 55 is a very good and unusual crime novel.  The pace is a little sluggish in the middle of the book, but it picks up well towards the end. The manner in which the police handle the case also requires some suspension of disbelief.  The ending will divide readers, but it will stick in your mind for some time. The overall effect is very good, and I look forward to Delargy’s next novel.

Four stars out of five!

Thanks to Simon & Schuster Australia and the Canberra Weekly for an early copy.