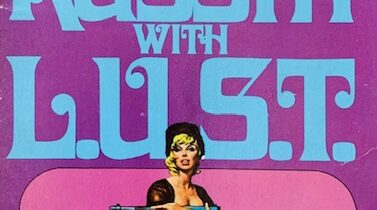 The success of the James Bond books and shows like The Man From UNCLE spawned a number of spy imitators, including spoofs which added an increased risque element to the spy scene.

The Lady From L.U.S.T. series by Rod Gray (pseudonym for Gardner Fox) was probably one of the weakest, although it did have its followers. Eve Drum (Agent Oh Oh Sex) was the eponymous Lady From L.U.S.T. (League of Undercover Spies and Terrorists) and she enthusiastically made her way through a series of exotic and semi-erotic adventures. The series, starting in 1967, initially ran for eighteen books (Tower Publishing) over five years and then returned in 1975 for another seven books.

To Russia With L.U.S.T. was first published in 1968 and was the sixth book in the series. It runs along the standard course for the series, with Eve being sent into Russia to blackmail a top-level Soviet official into handing over important secrets. Of course she uses her considerable charms and a long list of sexual techniques to extract the information. It is all pretty bland stuff these days and is quite mechanical in its descriptions, although at the time it must have seemed risque.

There is a light tone to the language and it is clear that no one is taking it too seriously:

“My assignments take me into die-ins and kill-ins from time to time. I get to do groovy things like zap murders, steal formulas, hijack scientists.”

It is very light reading, but very dated these days.

This edition of To Russia With L.U.S.T. was part of the re-released series in 1973 under the Belmont Tower name. It is wrongly labelled 9 on the cover – Belmont Tower apparently messed with the original order of the books.

The Cover: the 1973 edition re-uses the original artwork done by famed illustrator Paul Rader for the first edition of the book. It is slightly reduced in size from the original image, probably to accommodate the new “The Lady From L.U.S.T.” logo at the top of the book. The smaller picture reduces its impact (see below), but it is still quite good. It shows Eve mid-move in a Russian dance with her leg outstretched and an automatic rifle covering her breasts. Strapped to her thigh is a small gun in a garter belt. The purple background washes out and softens the illustration slightly and reduces it impact the original had against the Russian Red background. It does, however, give it a very 1970s feel!

The original cover had the not too subtle blurb of: “Undercover Agent Oh Oh Sex tries to penetrate Russia – and vice versa.” On the 1973 edition it is replaced with the milder and slightly amusing pun of: “The Lady From L.U.S.T. takes on the Russian bare.”

It is not a great cover, but it does do a good job of locating the book in the sub-genre of sexy, James Bond spoof!

The cover for the first edition of the book is below